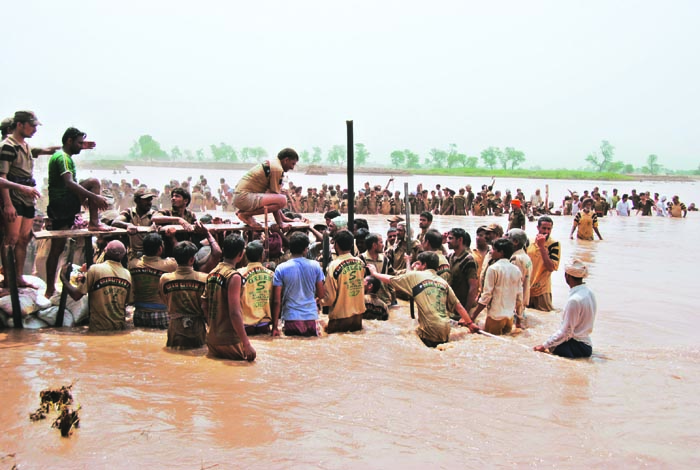 In 2001, when Revered Saint Gurmeet Ram Rahim singh Ji Insan of Dera Sacha Sauda formed Shah Satnam Ji Green ‘S’ Welfare Force Wing then many atheist and infidels commented very worthless and rubbish things. However, today to see this wing’s Humanitarian activities everyone is found appreciating. Volunteers of the wing have answered those infidels with their selfless services and now everyone takes its name with great respect and honor.

This wing has shown incredible success in disasters recoveries not only in India but in abroad too. At every time of disaster this wing has proved itself as a guardian angel for the victims. Efforts made by them during the disastrous rain in Haryana-Punjab in 2010 are really unforgettable. It is well known that from Ambala to Sirsa in Haryana and from Patiala to Sardulgarh in Punjab around 30,000 volunteers of Shah Satnam Ji Green ‘S’ Welfare Force Wing were engage in assisting the flood afflicted victims.
They had arranged tractors, trolleys, JCB as well as meals for them. Wearing a special dress these volunteers acted as distress reliever for the victims. Last year when the breach in Tangri River afflicted Ambala city and nearby villages then these activists were engaged in saving others lives at the cost of their own without bothering for their business and all. They helped the victims in coming out of the flood and taking the luggage at the safe places. Also, they arranged fodder for the animals and medicines for the needy ones. When Hansi-Butana canal in Kaithal and Ghaggar River in Sirsa-Fatehabad were so scary for the people then the volunteers of this force were lives savers.
When Firozabad-Sirsa experienced massive disaster in Ghaggar River then these volunteers stood upon there like a safety wall. The Govt. did not find itself able to serve the victims however the Shah Satnam Ji Green ‘S’ Welfare Force Wing activists helped them a lot with their strong passion and Great Spirit. By creating D-typed dams of 500 -550 meters they just recede the water. Local authorities, Govt., politicians including every resident were found appreciating Dera Sacha Sauda to see the dedication, passion and enthusiasm among them. Last year, during the worst situation of flood, wing volunteers continuously involved themselves in assisting the victims. This was a great example which is never comparable.