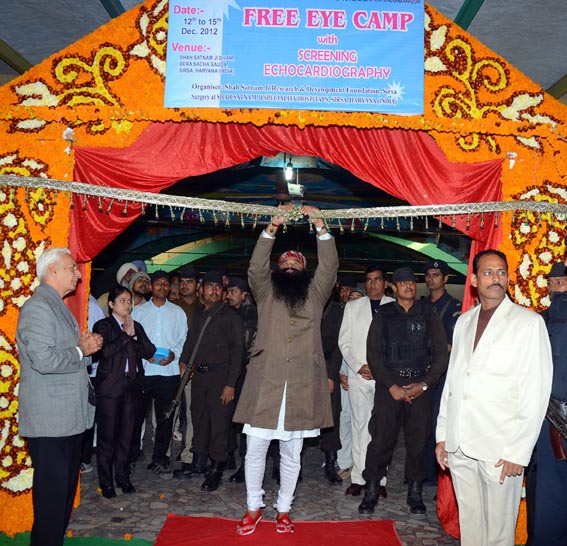 Revered Saint Gurmeet Ram Rahim Singh Ji Insan inaugurated the camp by joining the ribbons. On the first day of camp, Heart specialists from America and Medanata Hospital (Gurgaon) examined heart patients with the ultra modern equipments. Further, eye specialists screened many patients. The patients selected for operations will be operated upon in the state-of-the-art Surgical Suite at Shah Satnam Ji Specialty Hospital, Sirsa. Sachkhand Hall at Shah Satnam Ji Dham has been reserved for patients’ rest; separate wards for men and women have been made. Thousands of volunteers have been assigned their duty for taking care of the patients.
On this occasion His Holiness Guruji bestowed immense blessings upon heart and eye specialists rendering their services. Revered Guruji said, “In the sacred memory of Beparawah Shah Satnam Singh Ji Maharaj a free eye checkup and operation camp has been conducting since 1992 on 13-15 December. So far, 19,856 operations have been done successfully in 20 years. Dera Sacha Sauda has been proved a boon for the people who had lost their eyes. This year in 21st mega camp, heart checkup camp will also be conducted along with eye operation and echocardiography camp so that the people may save themselves from the risk of heart attacks by making changes in their eating habits and other things. In this camp, eye ailments like cornea, glaucoma, retina, squint etc. and cataract removal surgeries will be carried out through Laser, Cold Phaco and SICS techniques. All the necessary arrangements for the patients have been made at very large scale. Till now, 2847 patients have been registered and many people have been treated which includes 1402 men and 1445 women. Registrations are still in progress. Nine state of the art operation theatres have been made in Shah Satnam Ji Specialty Hospital.”
In this camp, many renowned super-specialists of eyes Dr. V.K. Dada, Dr. Tanuj Dada, DR. Pradeep Sharma, Dr. Vinod Byala, and Dr. Dinesh Talwar from Delhi, Dr. V.P. Gupta (Delhi), Dr. Avnish (Chandigarh), DR. Harpreet (Chandigarh), Dr. Hardeep (Jalandhar), Eye specilast Dr. Aditya and Monika Insan from Shah Satnam Ji Specialty Hospital have been rendering their selfless services.