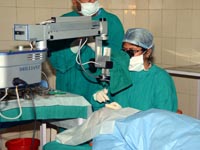 Till the 5th day, surgery of 1898 patients has been successfully done.

The free eye camp was inaugurated by Revered Saint Gurmeet Ram Rahim Singh Ji Insan on 13th December 2013 by “Joining the Ribbons” with his pious lotus hands. While inaugurating the camp, Revered Guru J said that on 13th, 14th and 15th December every year free eye check-up and operation camp is organized on the holy remembrance of His Holiness Param Pita Shah Satnam Ji Maharaj through which thousands of people are getting benefited. This camp was started from the year 1992 and more than 21,371 operations have been successfully done till 2012.

A numerous number of people from several states like Haryana, Punjab, Rajasthan, UP, Delhi are being benefited from this camp.

The eye specialists examine the patients with modern machines and select them for surgery. The selected patients are then taken through ambulance to the operation theaters equipped with highly modern technology & machines of Shah Satnam Ji Speciality Hospital. The operated patients stay in the rest house temporarily built in Sachkhand Hall of Shah Satnam Ji Dham and thousands of volunteers are appointed to take care of them. Separate wards have been made in Sachkhand Hall for females and males.

The happiness on the faces of patients getting operated in the eye camp can be clearly seen. Those who were feeling themselves handicapped and dependent on others due to loss of eyesight found a new ray of hope in Dera Sacha Sauda. Patients were seen saying that with the blessings of Revered Saint Gurmeet Ram Rahim Singh Ji Insan, they have not only got light back in their life but have also been served so earnestly by Dera Sacha Sauda volunteers that their own children may not have done.

Abiding by the true teachings of Revered Guru Ji, thousands of male and female Dera Sacha Sauda volunteers are taking care of the patients throughout the day. The volunteers give the patients medicines on time, help them have their meals, take them to wash rooms holding their hands and help them in all their tasks, treating them just like their real parents.