Mega Cleanliness Campaign on 6th March in Gurugram- A New Example of Reverence and Devotion! 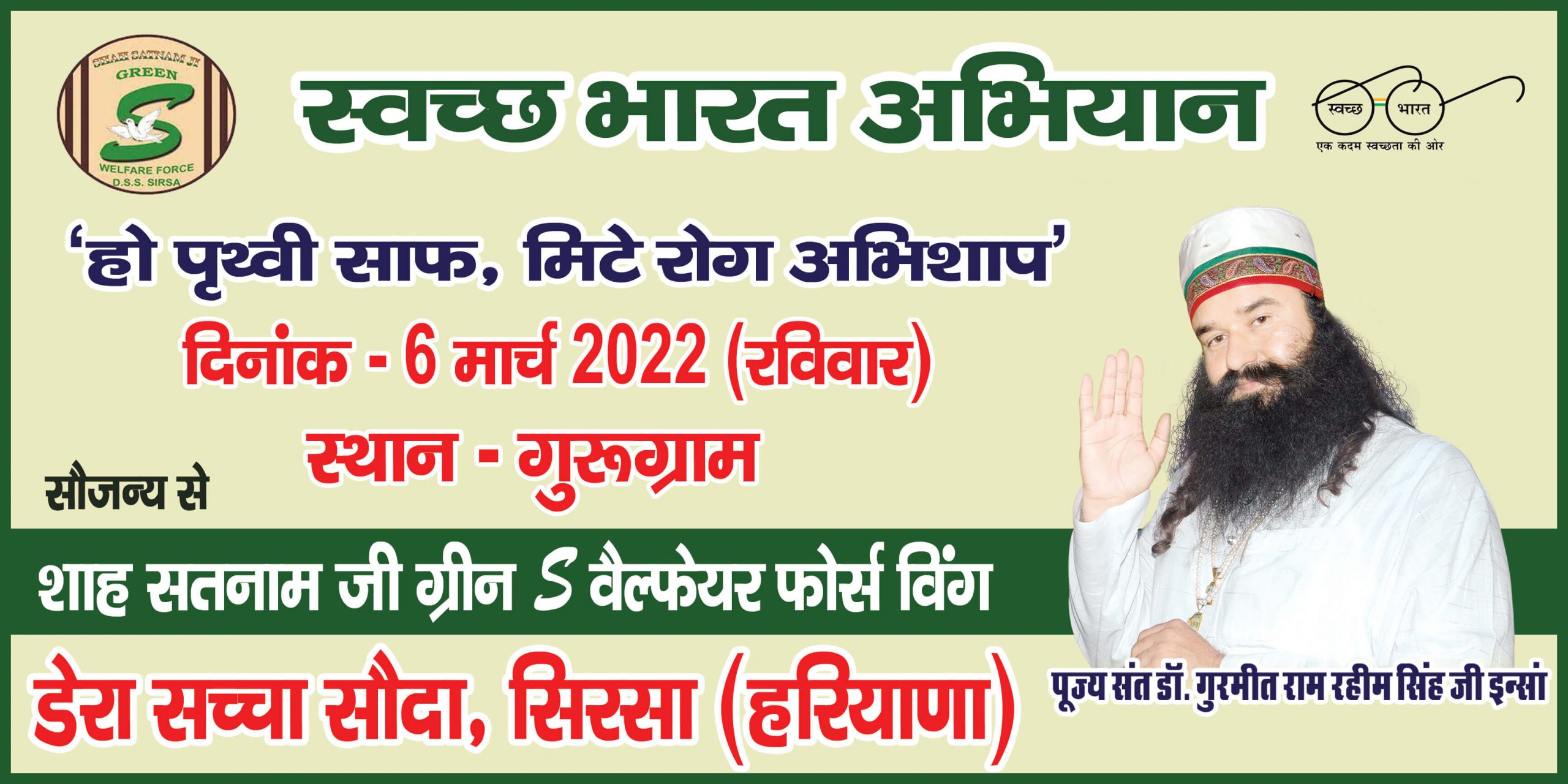 On 6th March 2022, a mega cleanliness drive has been organized in Gurugram. A new and unique example of devotion will be set up when the ocean of Good Samaritans reaches the city to clean it up and pay gratitude to their Master. In the history of spirituality, it would be the greatest moment when the devotees will salute and pay reverence to the pious land touched by Lotus Feet of Revered Guruji, Saint Dr. Gurmeet Ram Rahim Singh Ji Insan, by extending their selfless services via this cleanliness campaign.

Millions of Good Samaritans- One Inspiration!

It’s rather unimaginable that millions of people stay ever ready to not just follow & manifest the teachings of their Spiritual Master, instead turn out as the biggest inspiration for the public. One can see this impossible thing happen only in Dera Sacha Sauda. Despite their caste, creed, religion, social status, professions, businesses, and all, the devotees never leave any stone unturned to express their devotion and commitment towards the Master.

Who inspires them? It’s only the grace of His Holiness, Saint Dr. Gurmeet Ram Rahim Singh Ji Insan that keeps them active and ever ready to serve humanity. They are in millions and only one source of inspiration keeps them united and enthusiastic to serve humanity in every circumstance.

In 2011, these cleanliness campaigns were initiated by His Holiness and 32 campaigns have been run so far. In Gurugram, this campaign was dated back to 17th December 2011 when lakhs of Dera Sacha Sauda volunteers cleaned the city in seven hours in the presence of His Holiness.

Now on 6th March 2022, again this campaign will be conducted wherein lakhs of disciples take part and follow the teachings of their Master wholeheartedly.

An Applauding Way to Pay Reverence!

A disciple spares no effort to pay gratitude to his Guru, who showcased the right path to living and uplifting humanity. On the same token, the disciples from the whole of India will reach Gurugram to pay reverence to their Master, Saint Dr. MSG, who stayed there for 21 days. On 7th February, His Holiness was granted furlough for 21 days and Guruji stayed in Naam Charcha Ghar situated in Gurugram for this tenure of time.

Each devotee followed the guidelines and maintained decorum by following the law & order calmly. They displayed devotion and discipline in the best manner without breaking any rules. Now out of respect and devotion, they collectively decided to pay reverence to this holy land where Guruji stayed for 21 days. They want to extend salutations to this sacred city in which His Holiness placed His lotus feet. We think there’s no better way to express their extreme love for the Master!

The devotion, fidelity, and reverence towards Revered Guruji in the hearts of millions of devotees know no bounds. To have a glimpse of that pious land, this cleanliness campaign has been organized on 6th March. Every disciple was quite anxious to have a glimpse of Guruji but following the law and maintaining discipline they kept their emotions under control and didn’t visit the city.

However, the yearning to touch that holy land is still alive in the hearts of disciples. For the fulfilment of this deep desire, the campaign has been organized on 6th March in Gurugram. Let us all become part of this noble initiative and attain holy blessings.