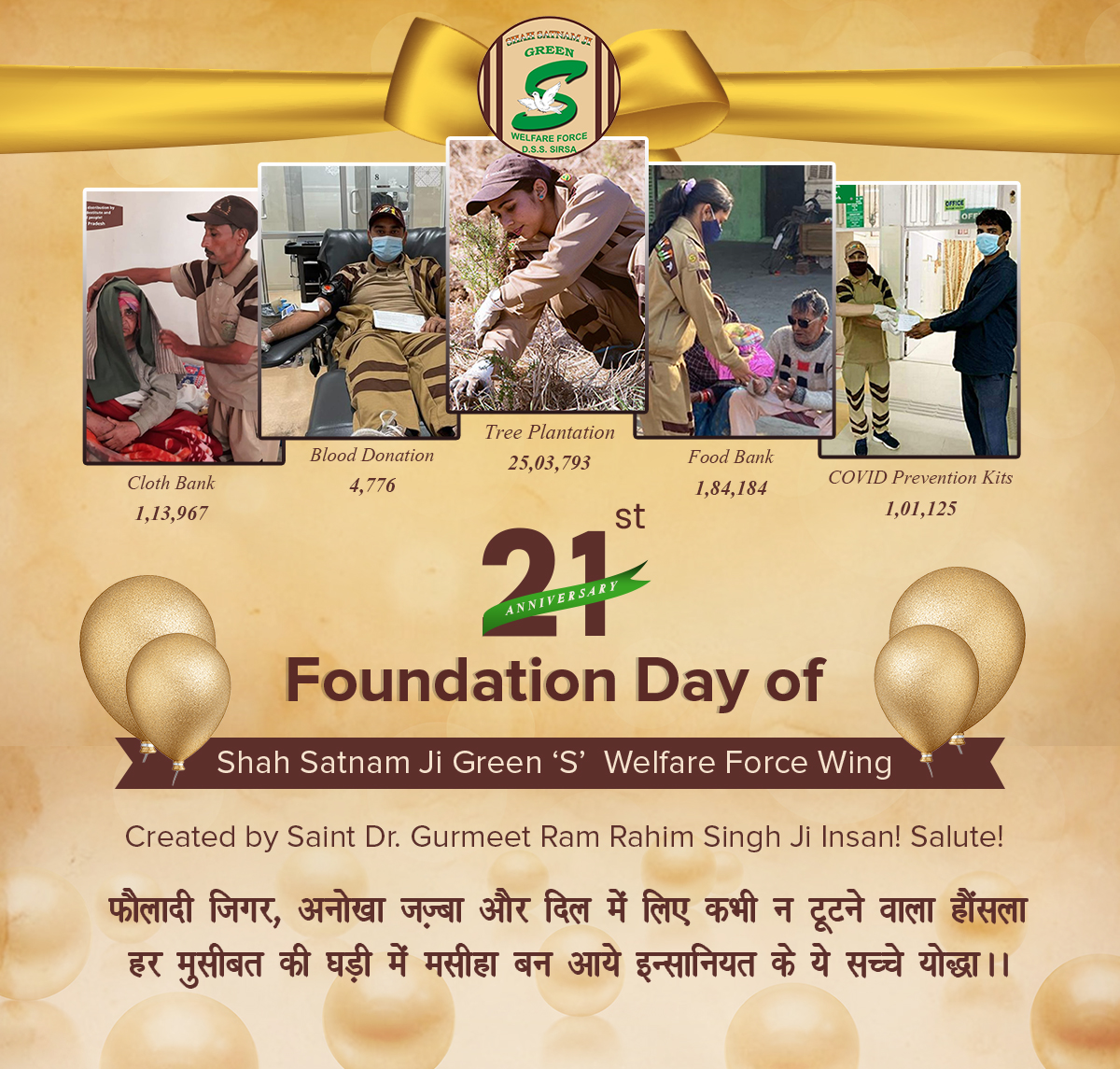 In human history, you will witness little to no effort made by people to assist the needy in distress, remove their agonies/troubles, and provide instant support. It’s rare to witness people using an organized approach to take the destitute out of their woes. The self-centred world wrapped up everyone in their own matters and issues. People are losing their values of a human and live their entire life revolving around themselves.

Fortunately, everything doesn’t cease to exist. Contemplating the urgency of time and to set an unparalleled milestone of humanity in the universe, the most benevolent Saint Dr. Gurmeet Ram Rahim Singh Ji Insan established a unique force named “Shah Satnam Ji Green ‘S’ Welfare Force Wing” in February 2001. It consists of lakhs of volunteers who passionately put everything at stake to help others. The speciality of this force is that it doesn’t work on money or any materialistic things, rather they work on humanitarian values being instilled by His Holiness.

When a cyclone in 1999 hit Orissa and the earthquake shook Gujarat in 2001, then the acute need of establishing a humanitarian force was felt. At that point, to help people who become the victims of such natural or man-made incidents, this force was founded by His Holiness. The purpose was to serve people and take them out of distress with collective efforts. The 22nd and 23rd of January are celebrated as Foundation Day of this unbeatable selfless force by Dera Sacha Sauda.

The Knights in Shining Armour for Every Sufferer!

History witnessed the courage and unexampled commitment of these humanitarian warriors who emerged as the real saviours for the victims in every difficult situation. In 2001 when a massive earthquake hit with 7.7 magnitudes Gujarat’s Bhuj region, then the most benevolent, His Holiness himself reached the affected place with the team of these volunteers. They reached out to people who were not covered by any authority and constructed free homes for them, providing food, clothes, and all necessary items to live. The people of Gujarat felt safe after having Guruji with them during these challenging times.

The year 2004 brought the most devastating time for people living in Andaman & Nicobar Islands. Tsunami wreaked havoc with 9.1 magnitudes in the whole area and people were dying because of starvation and non-fulfilment of their basic living needs. The authorities were finding themselves unable to reach out because of the deadly earthquake in the ocean. However, these volunteers reached the sufferers after crossing terrible terrain and Kaala Pani, even though they were from landscape areas and didn’t know anything about this hard-living place. They lived there for 55 days and extended every possible help by giving roof, food, clothing, appliances, utensils, and all other necessary items.

Likewise, in every devastating situation, cyclonic winds in 2003 hit Punjab badly, earthquake in 2005 clutched Jammu & Kashmir, Orissa flood in 2008, Bihar flood in 2008, massive Darjeeling fire in 2012, Uttrakhand flood in 2013, and so on. Their support is a real ray of hope for every casualty badly affected by any incident or event. Every day they keep humanity on priority and help people to come out of their sufferings caused by natural or man-made circumstances.

137 Welfare Works by Green ‘S’ Warriors to Make This World A Better Place!

‘Humanity is Religion’ is a famous adage written and spoken by many but rare are those who follow it in the real sense. Contributing to the goodness & well-being of others, Shah Satnam Ji Green ‘S’ Welfare Force Wing volunteers are making their lives more meaningful by walking on the guidance and teachings of His Holiness. Their every step corresponds to their principles and their deep commitment towards this proverb, ‘Humanity is Our Religion!’

This force has not left any field in extending help to the needy. 137 welfare works are carried on worldwide that are proving as a boon for the underprivileged. Here are some of them!

Coming forward to donate blood voluntarily is no less than a miracle in this self-centred world. However, these Green ‘S’ Force volunteers remain always up for it. They have been given the name ‘True Blood Pumps’ by His Holiness for their unique level of commitment to saving people from dying in shortage of blood.

They have saved millions of people so far by donating blood. Whether it was bomb blasts in Jaipur, Mumbai, Assam, Delhi, or any typical situation, these volunteers emerge as the real saviours for the victims. They reach the affected spot at a moment’s notice and save people in huge numbers. Moreover, this free blood donation is done to Army, Police, and Media persons in priority. Regular camps are also organized and every time a record-breaking vista emerges where more people reach to donate blood crossing the capacity or limits set by blood collector teams. These teams remain awestruck by visualizing this extraordinary passion of volunteers to donate blood. In the year 2021, 4776 units of blood have been donated by these volunteers to save lives.

To make the earth free from curses and diseases, His Holiness began cleanliness campaigns globally wherein these volunteers subsuming doctors, engineers, teachers, businessmen and all reach the spot by taking brooms in their hands. Witnessing their unseen zeal of cleaning a city, the locals startle and their wonder knows no bounds when they come across the qualifications and professions of these volunteers.

The locals take a pledge to keep their surroundings clean and make our Mother Earth pure by not spreading filth and grime on roads or other places except dustbins. It’s a big revolution that people are realizing their duties with these attempts of this force. These campaigns are carried on globally in always every region.

To beat climate change and global warming situations, tree plantation is quite an effective measure. Taking environmental conservation as a necessity and not just an option, the volunteers of this force plant a maximum number of trees every year. Even they celebrate the special days by planting as many trees as they can. Most of them have pledged to plant at least 24 trees per year, eventually today millions of trees have been planted globally by them. Even they do proper nourishment too and with their efforts, 75% of trees are healthily growing and contributing in giving a green cover to our planet.

The 15th August, incarnation day of Revered Saint Dr. Gurmeet Ram Rahim Singh Ji Insan is celebrated by each volunteer by planting maximum saplings. It’s a way to gift their master in the most unique & intriguing way by investing in the environment and Mother Earth. In 2021, 25,03,793 saplings have been planted by them in the whole world.

Besides serving during life, these volunteers do posthumous donations as well. They have taken a pledge of eyes and body donation after death. Posthumous eyes donation is bringing light to myriads of dark lives. Similarly, body donation is a revolutionary step in medical advancements. Now doctors can easily research to evolve new treatment ways. Their eternal service is serving humanity even after their death.

To uplift the glory of women, many initiatives such as countering the menace of female foeticide (Guruji Himself adopted and saved these girls who were either abandoned by parents or were to be killed before birth) & millions have pledged to never do this crime of killing daughters. Moreover, giving self-defence training to women, opening vocational centres for their livelihood, promoting girl’s education, helping young widows to get married again, providing financial aid to help needy families in their daughter’s marriage, arranging the marriage of physically challenged girls, providing nutritious food & medical treatment to poor pregnant ladies, saving prostitutes and many more.

The year 2021 witnessed this imperishable passion again. Even when the pandemic hit and situations were not normal, these volunteers consistently provided their help and extended support of every kind. In this year, they distributed 1,84,184 free food kits to underprivileged families ensuring that no one dies of hunger, clothes were distributed to 1,13,104 needy ones, 89 posthumous body donations, 75 free newly constructed homes to the destitute families, 61 needy families were helped in their daughters’ marriages, 31411 fruit kits were distributed to the needy patients for their early recovery & better nourishment, 101125 Covid prevention kits were distributed to help people stay protected from the virus. No matter how worse the situation might get, nothing can stop them from performing welfare works and extending help to the needy.

Usually, people think, these volunteers do all these noble deeds to make world records, but the reality is, their dedication & unparalleled commitment to serving mankind automatically makes records. They have been trained to save people stuck in a fire, drought, flood, earthquake, building collapse, tsunami, and all. The point here to underscore is, they give it in writing that if during their service to mankind, they get injured or died, then they themselves are responsible for that. You will not get this level of passion to keep humanity in priority. They don’t take a single penny for their work and commitment.

The reward for their services is the immense blessings of His Holiness. Guruji preaches, “If you save one life or one creature of God, then God will not keep your spare of anything. He will brim you with peerless joy that you can’t even imagine.” And, the same happens! The experiences of these volunteers are out of the world and it would be hard for a common man to believe in the miracles that volunteers experience every day.

Pledge to Help Needy at Any Cost!

These are pious words of His Holiness who has laid the foundation of a selfless society with infinite initiatives and favours. Walking on the same, these volunteers try their level best to help others even by staking their own lives. Without taking a single penny, they have pledged to help the needy in any situation and try with all their might to remove their troubles. They put their own time, effort, and money to spread kindness and positivity in the lives of people.

They have successfully broken the myth of people who think that you can help others if you have millions! A kind effort just takes your dedication, selfless love, and willingness to bring someone out of trouble. You don’t need to have a huge net worth or need to be famous to help others. Your generous heart is enough to do that!

Contributing to society is one of the essential parts of our lives, but anyhow, it has been overlooked. Shah Satnam Ji Green ‘S’ welfare Force Wing is a living example of this contribution, commitment, altruistic endeavours, dedication, and love for mankind. Having a generous heart and performing noble selfless deeds provide meaning to our lives. Let us take a lesson and put effort into creating a positive change in this world by having a heart full of generosity and kindness!

Once again, congratulations on the 21st Foundation Day of this unbeatable, unparalleled, and most dedicated, Shah Satnam Ji Green ‘S’ Welfare Force Wing!