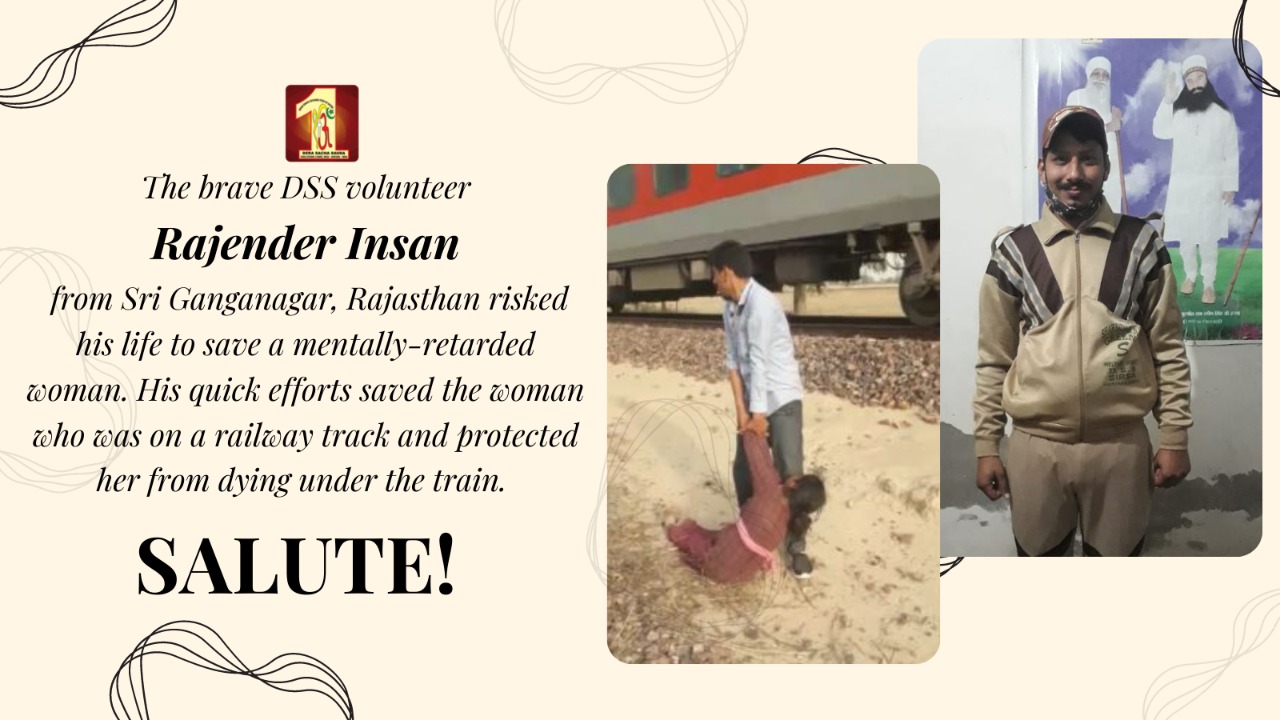 ‘Even though I got injured during this effort, these injuries are nothing before the happiness of saving someone’s life.’ – Rajendra Insan

Dera Sacha Sauda volunteers are acclaimed as the most compassionate and brave-hearted ones whose timely actions have saved millions of lives so far. Whether it is a quick requirement of blood donation, saving lives of humans, animals, or birds, constructing a home for the destitute to shelter him, or satiating the hunger of underprivileged families, whoever needs their support, they remain at forefront of helping them.

They work on the humanitarian principles and teachings of Saint Dr. Gurmeet Ram Rahim Singh Ji Insan which work as a booster for them. However, risking own life to save another one is not everyone’s cup of tea. For DSS volunteers, a human must perform humanitarian duties in saving people at any cost. They don’t step back even if it risks their lives. Recently, one of these valiant Dera Sacha Sauda volunteers named Rajendra Insan saved a mentally retarded woman even by staking own life as even a second delay could have led to death.

A mentally retarded woman was standing in front of a fast-moving train on railway tracks of Sri Ganganagar- Suratgarh railway route. Seeing her standing in front of that speeding train, without any second thought, Rajender Insan quickly rushed there and pulled her from the tracks. A single-second delay may have taken the life of that woman. Whoever was the witness to that incident applauded the DSS volunteer who emerged as an angel for that woman.

As per the farmers working in the nearby fields, even a moment’s delay would have led to the death of a retarded woman. While saving the woman, the DSS volunteer himself got injured and after a long time, he was able to handle himself. But he didn’t care about his own injuries while saving a life.

The incident happened in this way. A mentally-retarded young woman was walking on the tracks of a train near Jodhewala in Sriganganagar district of Rajasthan on Wednesday evening, and the train was coming from the front. Seeing this, Rajendra Insan, the volunteer of Shah Satnam Ji Green ‘S’ Welfare Force Wing, immediately while remembering Guru, jumped on the train track and saved the life of that woman. Rajendra Insan got minor injuries in this incident but the good thing is that he is now safe.

While giving complete details, he told that he got a phone call a day before this incident about a mentally retarded woman who was roaming on the roads and railway tracks. He said with the inspiration and guidance of Revered Guruji, they saved several mentally retarded persons, got them treated well, and then reunited them with their families. So, they usually get such phone calls to help these people. When he got the information, he immediately called the lady volunteers of Shah Satnam Ji Green ‘S’ Welfare Force Wing and called them to reach the spot. They went out to find that woman. After several hours of hard work, they found the girl standing on the train track near Jodhewala late on Wednesday evening. As soon as Rajendra saw on the other side that the train was coming from the front, he immediately jumped on the rails and dragged the woman to the other side. If even a second was late, both of their lives could have been lost.

He gave the entire credit to His Holiness Saint Dr. MSG and his teachings that filled such unparalleled passion among them all. He also said it’s all the benevolence of Revered Guruji that today he and that woman both are safe.

For your wonder, Rajendra Insan has saved and reunited 97 retarded young men and women so far to their families by taking care of them and getting them treated well. He said, ‘Today I am extremely happy that our team has saved a woman safely. Even though I got injured during this effort, these injuries are nothing before the happiness of saving someone’s life.’

Dera Sacha Sauda volunteer Rajendra Insan is playing a special role in the campaign to reunite mentally-retarded persons to their families, for which he was honored on Police Day by IG Bikaner.

Regional MLA Gurmeet Singh Kunnar, former minister of the Rajasthan government, appreciated the selfless spirit of the volunteers. He said that these volunteers and their endeavors are worth salutations.  He also appreciated Dera Sacha Sauda for teaching Rajendra Insan to work for the betterment of humanity.

Today one brave act of a volunteer turned out as the biggest inspiration for the society. Just think if he also turned into an onlooker then we would have been reading another mishap headline in the newspaper. Timely action can avert the casualties and it needs great courage, which is rarely observed anywhere. That’s the reason, Rajendra Insan deserves a big applause for this gallantry of jumping to action, risking own life, and quickly saving the mentally retarded woman by pulling her from the tracks.

Such acts surely make us believe in angelic personalities among humans. Though he doesn’t have any formal training for doing so, this guy didn’t hesitate before jumping onto the railway tracks to save that woman. It’s all the blessings of His Holiness that Rajendra Insan quickly managed to save a life.

We are grateful for having Saint Dr. Gurmeet Ram Rahim Singh Ji Insan whose motivation, teachings and guidance are setting new milestones of selflessness and humanity in the world of hatred & envy. We hope, everyone will get a lesson and perform the duties of being a human.