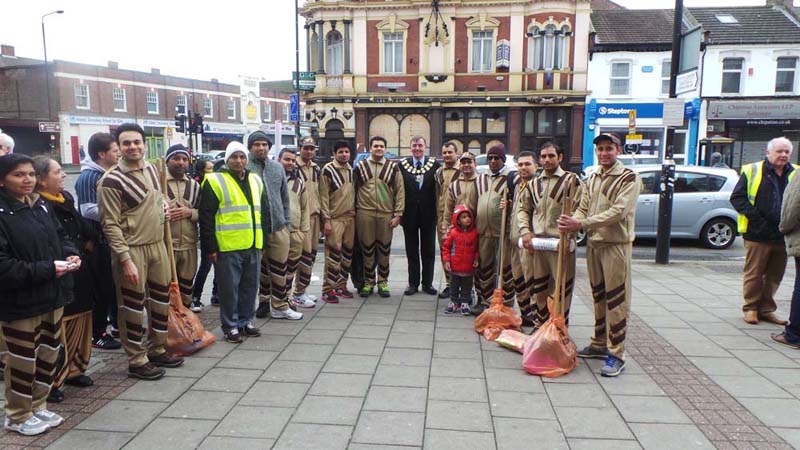 Dera Sacha Sauda, Sirsa, India, which is known for its humanitarian activities, carries it with the same enthusiasm all across the globe. The volunteers of Dera Sacha Sauda & members of its Shah Satnam Ji Green ‘S’ Welfare Force organized 14th Cleanliness Campaign in East Ham, London, UK on Saturday, 4th April 2015. These volunteers have already established their name by successfully carrying out 13 such Cleanliness Campaigns earlier.
The campaign was organized in continuation of the objective to make local residents aware about the importance of hygiene and the health benefits associated with it. Revered Guru Ji, Saint Gurmeet Ram Rahim Singh Ji Insan has initiated 106 activities for the welfare of mankind, one of that is to conduct Cleanliness Campaigns to make the earth clean and to spread awareness about the importance of hygiene.

Under this welfare activity, 28 Mega Cleanliness Campaigns have been organized in several cities of India including the Mega Cities of Delhi & Mumbai. The same is expanded globally through the devotees residing outside India by carrying such campaigns in their respective states and countries.

This campaign was organized by the New Ham Council in which the local residents as well as the police officers participated along with the volunteers of Dera Sacha Sauda . These volunteers have travelled far & wide in order to participate in this Safaai Mahabhiyaan. They took just 3 hours in order to cleanse 20 long roads.

People from local council had provided their full supported in carrying out this campaign.

The volunteers felt that our lord God, Pita Ji has blessed us with immense power and motivation to serve humanity by doing good deeds in order to awaken the society to clean their own area for a disease free Environment.
The Council thanked the Sangat (Volunteers) and Reverend Pita Ji whole heartedly for such an inspiration and motivation to clean someone else’s filth. They also honored the volunteers with a framed certificate for the same