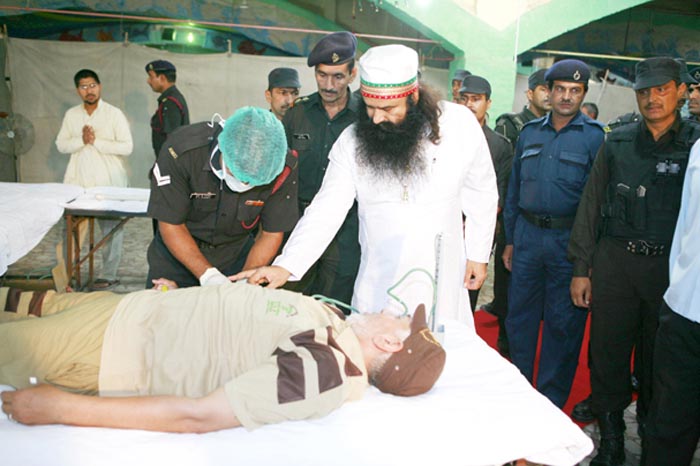 BLOOD DONATION AND GENERAL MEDICAL CAMP WILL BE ORGANIZED ON AUGUST 27, 2011

Globally renowned spiritual institution, Dera Sacha Sauda, has been donating blood for the valiant troops for last several years by sponsoring various camps. Besides, through free general medical camp destitute and indigent beings have been getting free medical treatment. Adding more to this, Blood donation and mass welfare medical camp (Jan kalyan parmarthi shivir) organized on 27th August in the premises of Dera Sacha Sauda. The camp would be inaugurated by His Holiness Revered Saint Gurmeet Ram Rahim Singh Ji Insan by “joining of ribbons“, a practice also customary and unique to this institution. Camp in-charge, Sh. Krishanpal Chauhan Insan told that blood donation camp would be sponsored by Shah Satnam Ji Green ‘S’ Welfare Force Wing and general medical camp would be employed under the auspices of Shah Satnam Ji Research and Development Foundation. He further added, “A team from Indian Army Transfusion Center (Delhi) will come there to collect the blood.”

“Specialist doctors would render their services for heart, cancer, and diabetic patients. After the screening, free medicines would be provided to the needy ones. Many renowned specialist and super specialist doctors from various states would give the helping hand in this camp. Registration of the patients would be done a day before the commencement of the camp,” Said Chauhan.