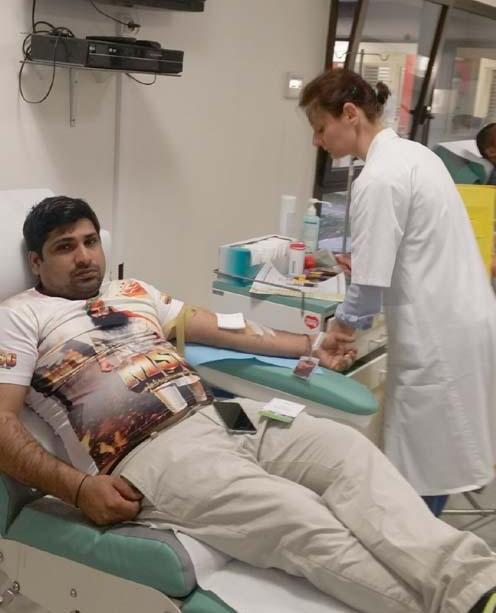 Paris which is synonymous with the most romantic city, got a new meaning to its name when the members of Shah Satnam Ji Green ‘S’ Welfare Force Wing of Dera Sacha Sauda, Haryana (India), showcased that the True Romance could only be with the Almighty God and serving His Beings, when they organized a Blood Donation Camp there.

The Blood Donation Camp was organized on April 13th, 2015 from 9am at Hospital de Lariboisiere, in the city Gare Du Nord, Paris (France). A total of 13 Units of Blood and 1 Unit of Plasma were collected in this Camp. It was such a touching scene looking at the volunteers and their humanitarian spirit. Truly it seemed that there is some supernatural power behind their enthusiasm and dedication towards humanity.

It was a matter of bemusement amongst the doctors and the staff, that the city which is renowned for worldly romance have some people from far off India, who are showcasing what True Love really is, by donating their blood which may save the life of unknown people.  They professed their love for humanity as is guided by their lord Saint Gurmeet Ram Rahim Singh Ji Insan.

and continuously donating blood on monthly basis since 2006 to eradicate the scarcity of blood.
The volunteers of Dera Sacha Sauda are well acquainted about the importance of blood donation for saving lives. This socio-spiritual organization situated in Sirsa, Haryana, India has set several records in Guinness World Records and Limca Book of Records in different welfare activities; whereas achieved 3 Guinness World Records for highest Blood Donation itself. Till date, the organization has set the highest record of 43,732 units of blood donated in a single day. Generally, Dera Sacha Sauda is referred as “True Blood Pump” on account of having thousands of volunteers who have already donated about 4 lakh units of blood so far and are always ready to donate blood whenever and wherever required.