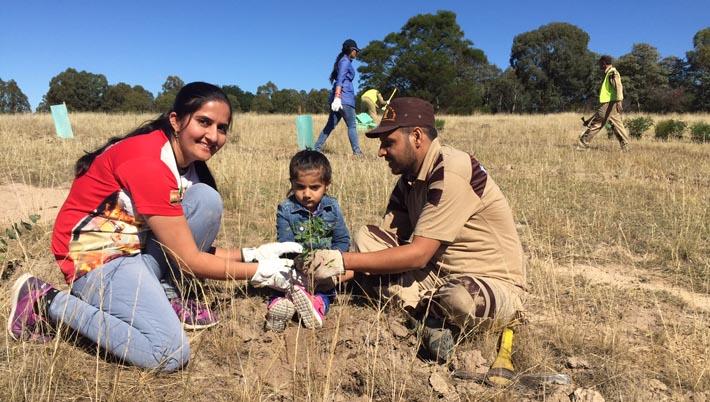 The International Chapter of this wing located at Australia, carried out a tree plantation drive on Saturday, 28th of March 2015.

“Thank you so much for your wonderful help on Saturday – 1850 plants in one day is an office record for us! It was one of the best days I’ve had out of CVA, and I hope your team had a good day also. Many, many Thanks.“– Cath Spratley (Regional Manager for CVA South NSW and ACT)

Mr James from Veola, which is Australia’s biggest waste management company owning about 16000 acres in Tarago, NSW, Australia, was highly impressed to hear about PITAJI, and all that He is doing for the welfare of humanity. He was particularly awe-struck about the world record of planting 6.7 million saplings in a day.

Ken from Conservation Volunteers Australia was mesmerized by the motivation and planting skills of the volunteers of Shah Satnam Ji Green ‘S’ Welfare Force Wing.

There were about 30 volunteers of Shah Satnam Ji Green S welfare Force Wing, Sydney, Australia who participated in this plantation drive.

The Volunteers, who are mostly located at Sydney, drove all the way to Tarago, which is about 300 kms from Sydney, to perform this Humanitarian Deed. There they even served Langar to all and also held the weekly Naamcharcha after the completion of planting.