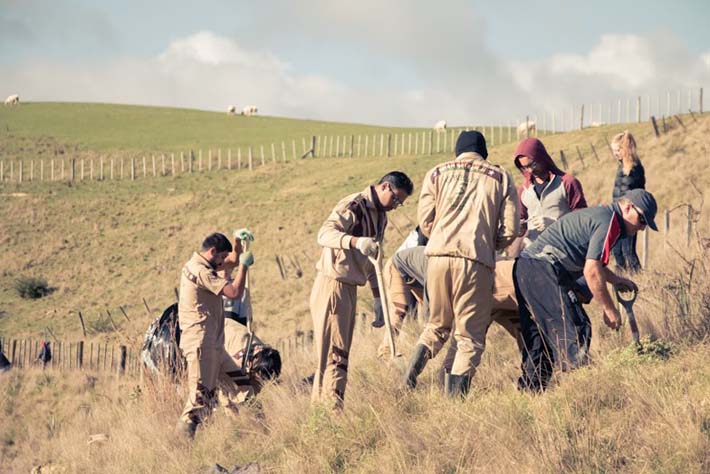 Shah Satnam Ji Green ‘S’ Welfare Force Wing Volunteers, New Zealand participated in Plantation Day organized by Auckland City Council Auckland, at Kawa Kawa Bay, Waitawa Regional Park.
The trees were planted by Volunteers at Waitawa Regional Park which is 60 km from Auckland Central. The City Council had about 10,000 saplings to be planted of which 1,350 were planted by the Volunteers of Shah Satnam Ji Green ‘S’ Welfare Force Wing, in just a couple of hours. The drive was conducted from 9:30 am in the morning to 1:00 pm and some trees will be up for plantation next week.

When Frank Garnier met these Volunteers, he having known the Volunteers for quite some time, as part of various Plantation Drives expressed his happiness for the fact that the Volunteers are doing a commendable job for past couple of years and are contributing more and more every year towards the green cover of the region. The Council members also expressed their heartfelt gratitude towards Dera Sacha Sauda Volunteers, and their Master Saint Gurmeet Ram Rahim Singh Ji Insan, as it is all because of the teachings of the True Master, that Volunteers have been contributing towards mother earth and relieving her of the pain and agony otherwise inflicted by the industrialization and other hazards of modernization.
Revered Guru Ji advocates Tree Plantation as the only means to reverse Global Warming, a major threat to the existence of the Planet. “If every human resorted to planting at least 12 trees in a year, we can put a stop to pollution and various other ill effects of modernization inflicted on man kind”, are the pious sayings of the Reverend Saint Gurmeet Ram Rahim Singh Ji Insan. The Volunteers, millions across the World are making sure their Master’s words are followed to bring heaven on Earth.