An Endeavor for Earth’s Salvage 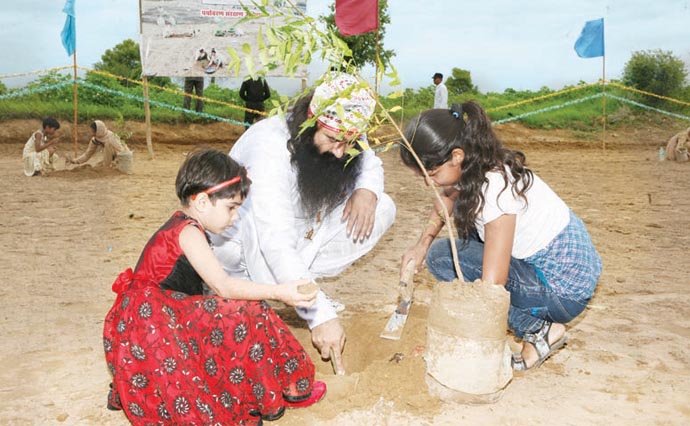 In an attempt to save Earth from the increasing pollution and global warming, the socio-spiritual organization, Dera Sacha Sauda based in Sirsa, Haryana (India) & having multiple branches across India and other countries, is consistently exerting rigorous efforts from last 4 years to plant as many trees as possible across the globe. Revered Guru Ji of Dera Sacha Sauda, Saint Gurmeet Ram Rahim Singh Ji Insan has always encouraged activities that are for the prosperity of humanity and nature. The extreme downfall in the strength of flora on earth and increase in global warming insisted Guru Ji to call for the enforcement of a mega tree plantation drive at mass level which can awaken mankind for their duty towards the nature. Thus, the welfare activity was named as “Nature Campaign” by the Revered Guru Ji. The idea of this drive visions to create a green earth for the present & future coming generations, so that, they can live a healthy and pollution-free life.

The first mega tree plantation drive under the Nature Campaign was initiated by Revered Saint Gurmeet Ram Rahim Singh Ji Insan on 15-Aug-2009 to mark the day as a celebration of his birthday and nation’s Independence Day by planting as many trees as possible. Since then, 15th August is celebrated as a Tree Plantation Day by the Dera Sacha Sauda followers across the globe. The drive is inaugurated by Revered Guru Ji in Sirsa by planting saplings and then volunteers & members of Shah Satnam Ji Green ‘S’ Welfare Force Wing, Dera Sacha Sauda spread all around the nation & other countries, plant the trees simultaneously within a stipulated time frame. This exhibits an incredible unity & team spirit towards a humanitarian cause within multiple locations. The best part of drive is that it does not cover only a particular city or state but covers almost all states of the nation and many other foreign countries.
In the same series, the 5th Mega Tree Plantation Campaign will be organized this year also on 15th August in which Dera Sacha Sauda is targeting to plant about 7,000,000 plants across the world. It’s worth mentioning here that Dera Sacha Sauda created Guinness World Record in its first plantation drive itself on 15th August 2009 for planting 6,873,451 saplings in 08 hours by 169,920 volunteers in 367 locations. A new record was then made in the year 2011 for planting 1,945,535 plants simultaneously in just one hour by 340,250 volunteers in 408 locations all over the world. The figure jumped to 2,039,747 plants on 15-Aug-2012 for the no. of saplings planted across the globe in just one hour. The drive does not only aim to plant more saplings but to take care of them like a child by providing them adequate water & manure till the time they grow into trees. The successful execution of these drives can be clearly seen by the accolades and appreciations Dera Sacha Sauda has received from several national & international authorities for their tremendous efforts towards nature.
The extraordinary participation of Dera Sacha Sauda volunteers and their immense efforts for this cause can be easily demonstrated from the figures of last 4 years Tree Plantation drives held across the world.